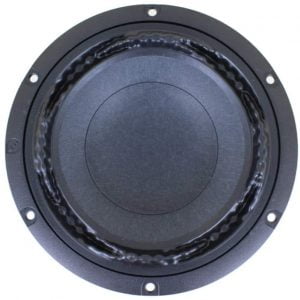 8-ohm version of the PTT6.5X08 is a 6.5” driver that truly cracks the long-stroke code. PURIFI’s research has identified the parameters that have so far prevented long-stroke drivers from breaking through in truly high-performance audio. The distortion of the acoustic output of a driver is a combination of several separate distortion mechanisms in the motor, cone, and suspension. When testing a complete driver with sine waves, a situation often arises where a small tweak seemingly improves harmonic distortion (HD) by letting two mechanisms counteract each other. This always leads to a clear worsening of intermodulation distortion (IMD) that becomes obvious when testing the unit with a more complex signal. This is why traditional HD tests fail to predict subjective sound quality.

PURIFI takes care to optimize the various distortion mechanisms separately, thus guaranteeing that any measured improvement truly reflects a real audible improvement no matter what the signal is. Accurate mathematical models are developed for the motor, suspension, and the vibroacoustic of the dome and surround. These models clearly explain several distortion mechanisms in each domain, which provides fundamental insights into better ways of constructing the motor, cone, and suspension. Finally, the same models are used to numerically fine-tune the geometry. This way of working reliably reduces multiple distortions mechanisms that secure low IMD for complex signals. 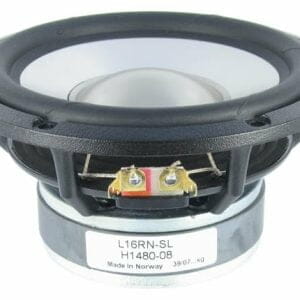