The popularity of the original Speedster kit prompted builders to ask for an MTM version – something they could use as a center channel.  The MTM didn’t work well.  Impedance was too low and it just didn’t sound right.   Playing with the TMM configuration, Paul hit on the best performance with 3 great benefits – High Spouse Approval Factor, deep bass, good sensitivity, and even some exotic drivers thrown in for good measure.

Paul began playing with wiring configurations… maybe a 2.5-way TMM? How bad of an impedance load could it really be? Not that bad, it turns out. The impedance of the Speedster TMM dips down to 4 Ohms, but that’s about on-par with most MTM designs out there. So it was definitely within the realm of possibility. Next up was to sketch up some cabinets… floor-standers… ahh, with the tweeter at the top, the tower could be shortened, and thus didn’t look quite so awkwardly tall. Now Paul had something to get excited about!

The crossover here is not too complicated. The woofer filter is basically a 3rd order electrical (with the resistor R3 used to contour the response a bit), and Inductor L4 is used to push the roll-off frequency of the second woofer nice and low. The tweeter filter is basically just a 2nd order electrical, with padding resistors in series on either side.

Maybe it’s just as well that this project took so long to come together. After dragging my feet, eventually giving in, trying out different cabinets and topologies, and finally ending up at a place no one expected, it all seemed to come together so neatly. It’s a killer little speaker that delivers well on many fronts: high Spouse Approval Factor, deep bass, good sensitivity, and even some exotic drivers thrown in for good measure. Way better than any sort of “Speedster Limo.”

The TMM is 2.5 way and amplifier friendly not lower than 6 ohms.

We can assemble and test the crossover for you at an additional charge.

We send a small portion from the sale of this kit to Paul.
If you are not ready to buy, consider giving a small donation for Paul’s contribution to the hobby.

Paul’s take on the Speedster TMM 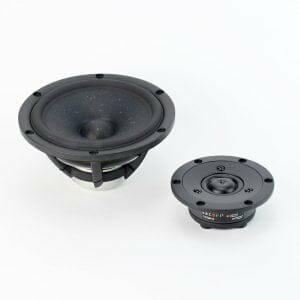